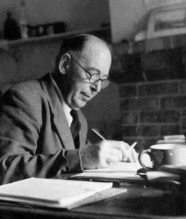 ABOUT
A new life of the Oxford literary scholar, children’s writer and Christian apologist C. S. Lewis, to be published in March 2013 by Tyndale House Publishers, Carol Stream, IL. This work is based on a critical reading of Lewis’s entire literary output, supplemented by archival work which casts much light on aspects of Lewis’s career and thought which will force a revision of some accepted themes of Lewis scholarship. The work includes newly-discovered letters to and from Lewis. This biography will be complemented by a collection of academic essays on Lewis’s intellectual context and development, to be published in June 2013 by Wiley-Blackwell. Both volumes are intended to mark the 50th anniversary of Lewis’s death in 1963.

REVIEWS
BOOKLIST gave it a starred review, “outstanding in its genre”; here is an excerpt: “McGrath does this so limpidly, so intelligently, and so sympathetically that this biography is the one Lewis’ admirers—especially those who, like him, believe that books are to be read and enjoyed—should prefer to all others.”
PUBLISHERS WEEKLY also gave it a starred review which can be found here: http://bit.ly/RSQGfv.